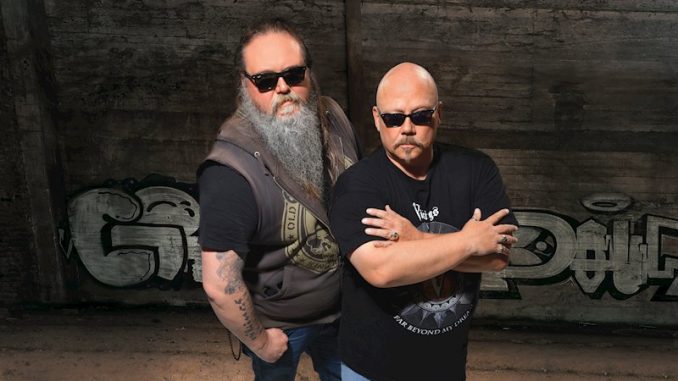 Hello! Congratulate you with release of CD Vikings «Far Beyond My Dream». Its awesome! Real true masterpiece of heavy metal! You must already read my review on it!

-Please, represent Vikings to our readers!

The band Vikings, founded in 1988, released their first CD (Across the great wide sea) in 1995. After several line changes shortly before the turn of the millennium, the band disbanded. In 2015, a new EP was released as part of a studio project.  Now two years later the Vikings are back with a new album. With the change to the singer Georg Fröhlich (Andreas Ilgmeier) and new the multi-instrumentalist Pete Eisen, the band has changed a lot and found their roots again, melody paired with power. With this new album the Vikings blossom into something fascinating and unique, driven by inspiration and an unshakeable desire for creativity. Georg’s uniqueness, energy, commitment and ability to dance between notes gives the Vikings even more strength. The new album was recorded and mixed in the legendary Krog-Studios in Stuttgart by Pete Eisen. From the epic and powerful Glow in your hand to the ballad of Before the rain to the dramatic melodic chorus of Far beyond my dream, the Vikings have set a new musical accent, … and gave us all the opportunity to get a seat at the big table in Walhalla to celebrate with the Vikings.

Georg: *»Far beyond my dream is the album we wanted to make, in a creative environment and without time pressure we were able to realize our ideas and are really proud of what we have achieved «- Pete Eisen — all Instruments.

— What is the latest news you can tell Vikings fans?

Pete: **We’re back in the studio writing new songs, the response to «Far beyond my dream» has blown us away and we’re very happy to have gained so many new fans with this album.

-What are the plans for the future?

Pete: **Besides the rehearsals for a live band we are marketing our CD and just finishing Pete´s Solo CD.

— about possible future albums, the release date and expectations for the material.

Pete: **We are already writing new material for our next CD. The advantage of acting as a duo gives us the opportunity to include only our ideas in the creation process. The new album will be harder and melodic at the same time. We will invite singing guests again, I can only say this much: Last surprise, it will be worth it. We have planned the release of the new album for the end of 2019.

— to possible side projects

Pete: **I am on final stages with my solo CD, Georg and Stefanie sing here several songs, it is a retrospective of musical time, it will be all represented blues, ballads, rockers and metal songs.

— how Vikings came to life.

Georg: *It was like 1988 when I heard from my friends that there was a meeting after school. I wasn’t invited, though. you have to imagine, there were no mobile phones, no internet. Only normal landline. So I swung myself on my bicycle and raced like a wild one towards the rehearsal room, which was at that time in a small church in the village. Once there I saw a couple of people with small equiments but more spectators than fit into the room, performing some ACDC songs. I was totally disintegrated that nobody had asked me if I would have liked to sing. Instead they took this other guy I didn’t like. When he finished his performance I pushed him to the side, picked up the microphone, the band started playing, I sang and it was clear: we found our singer. This day was the beginning of the Vikings.

• about the meaning of the name Viking

Georg: *In the evening we sat by the campfire in a secluded garden with many friends. We drank a lot of beer and were very happy. We already had one or two band rehearsals, only one name for the band was missing. We felt connected to our Nordic roots. Teutons, Celts, Anglo-Saxons… all tribes that lived in our region a few hundred years ago. what was more obvious and to call «Vikings»… and one emphasizes: At that time there were only 2 bands that were called that way. On the one hand we, and on the other hand a band from England, who were written completely differently. Remember, there was no internet at that time. Otherwise we could have made a statement right away. Today there are unfortunately too many «fake» Vikings on the market.We transport with the name simply strength, courage, connectedness and a little bit of mysticism.

— in the most successful live show of Vikings

Georg: *We had a lot of gigs in the past with the old cast. Often we were on the road with bikers. The organized fairs, there we flirted with the hot girls on stage, while they presented clothes that some bikers made themselves.

— on influences of viking music

Georg: *i don’t make my influences bright, of course we heard bands like iron Maiden, motorhead and Judas Priest in the 80s. Sure it stains off on us. Today we also concentrate on the so-called «New Metal», which I personally find very cool.

— on your influences while singing

Georg: The godfather of voices like: Bruce Dickinson, Jeff Tate and Chuck Billy

— please give little characteristic of the material of the debut CD;
• We wanted to go back to our first CD «Across the great wide sea». On this album you could already hear the first influences of melodic metal.

*I don’t know why everyone keeps asking me where the old singer went. I’m still here… only my name was changed by a wedding. there are probably some wrong messages about my dead. surely a translation error…

— about possible popular or symphonic elements in future releases.

Pete: **The work on our new CD will contain symphonic elements, we will work with an orchestra, Wagnerian element combined with iron metal, we are already curious how the collaboration will work.

Questions about «Far Beyond My Dream».

what fans can hear on the album

Pete: ** It’s really all there, from the classic ballad «Before the rain» to the hits «Far Beyond My Dream» and «Fly», as well as the epic «Send On The Lore» and the masterpiece «A glow in your hand» there’s melodic, partly rocky, partly slightly progressive heavy metal.

— like old material after the great history of the Vikings?

Georg: *You can hear the old power of the vikings again as we stopped in 1995. The album is the first in a hopefully long series of releases that we are striving for.

— who was involved in the writing process of the album?

Pete: **All songs were written by Pete and Georg, nobody else was involved in writing the songs.

— about the writing and recording process of the album

Pete: **We composed and recorded the whole album at Krog-Studios Stuttgart over a period of one year. We had every opportunity here to try out and record various ideas on tape, some of which were discarded. Georg and Pete produced the album together. It was mixed by Pete. For the mastering we chose the top-class ears of Max Erwin aka omee26. With all his musical abilities he was always at our side during the development process.

— to the lyrical concept

Georg: *The concept (and it always has been) was a transport of rather lyrical, unconnected text modules, which nevertheless express exactly the feeling of power, courage and connection. i hope that you can simply «find yourself» in the lyrics.

— on the cover Art concept

Georg: *Yes, the cover. It also transports this kind of «dream» in which we all live or are simply trapped. On the one hand our soul (The burning hand), then the castle in the valley (Our homeland)… this is threatened by the meteorites (Meteorites = external problems). The landscape is bordered by high mountain ranges (protection symbol)… one can interpret it endlessly. But that’s exactly how a heavy metal cover has to look like.

— to review reactions to Far Beyond My Dream

Pete: **We didn’t expect these reactions in such a way, that our music leaves such a positive impression, we are very happy.

Georg: *I must honestly admit that I know neither Rebellion nor Michael Seifert… but after this interview I will do that urgently.

— to your opinion on the latest album from Avantasia

Pete: **I am a big fan of «Avantasia», they always deliver very good records.

— to your opinion about the current scene of Viking Metal

Georg: *I personally think there’s a difference between the «Viking» metal and bands that are just called that. First of all there is «Amon Amarth» or «Bathory»… these bands create the so called «Vikings-metal» (Whatever is viking about it — I don’t know). Real viking music would be more folklore with flutes and drums. SO Vikings have 650 a.d. at that time. Music made. That happened today is the same what Hollywood did with the cowboys… all nonsense :-). And then there are bands today that are called vikings and make dance-pop-music, with their upper bodies free and look like Rocco Siffredi. What the hell does this have to do with Vikings? The others come from India… and make Bollywood music… call themselves Vikings… seldom laughed so much.

— what heavy metal means to you.

— Do you have family, hobbies, usually work, do you like alcohol?

Georg: *Oh, yeah, sure, we all have family and a steady job. Unfortunately you can’t earn any money as a musician nowadays (where everyone wants everything for free). In the 80’s and 90’s it was certainly no problem to earn a little money here and there with a bigger fanbase. Maybe also with fan articles. Today in the age of the internet and torrent servers, with cheapest streaming offered music has faded to a hobby. We need alcohol to equalize all this and still continue :-). German beer is also very good.

— on your 5 favorite high-power albums of all time.

Georg: *You have to say here that time is running out. Facebook is becoming increasingly unpopular with the target group. Times are changing. We always have to look for new sales channels and platforms that keep pace with the times. Snapchat, Instagram and so on. What else will there be? I don’t know… but there’s nothing more about facebook.

Special power metal forces question: Imagine someone big telling you that heavy metal is dead! What did you say to that?!

Georg: *Heavy metal will never die. it changes, absorbs other influences. To see and hear also in areas of rap and hip-hop. Electric guitar will never die out, it will only be used differently. The many thousands of visitors of heavy-metal concerts worldwide can’t be wrong… and with these people also a lot of money is earned. Certainly not as much as in pop… but otherwise there would be no open-air anymore.

Ok! Thanks for the answers! Do you want to say something to your fans?

Georg: *I wish our ex-USSR fans all the best and much joy with our record… I hope that we can be invited by big organizers and play on your stages.