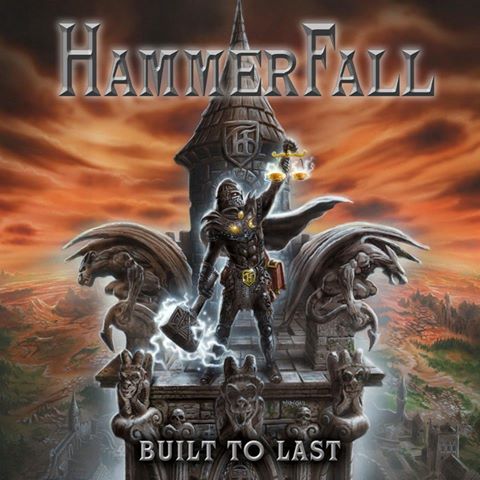 On the second album after the reunion, HammerFall continues to making traditional metal, remaining to the delight of fans loyal to precisely the material, that allowed them to stake their name. “Built To Last” has everything that was required of this group: charismatic vocals of Cans, sounding strong and beautiful, and in some places especially penetrating (see the operation on the bundles was not in vain), high-quality recording in the style of the previous album “(r)Evolution ”with the reservation for even greater clarity and clarity, and the structure of riffs gravitating to the classically heavy metal of the 80s and early 90s, and reminding me personally of Accept and their icons Russian Roulette/Objection Overruled ”, and even a cover made as for all previous Andreas Marschall albums in a classic style of the group, evoking nostalgic memories from the past glory of Hammers.

The album opens with a surprisingly modest action movie “Bring It!” Without a pronounced refrain, which is essentially nothing more than a pleasant and even number. The heat begins only on the second measured and hymn-like song “Hammer High”, the verses, bridges and chorus of which are endowed with impressively strong, catchy melodies reminiscent of numbers like “One More Time” and «The Enemy Within”, With the difference that “Hammer High ”is also reinforced by numerous pompous choirs. On “The Sacred Vow” with its various rhythms throughout the composition and an amazingly majestic chorus, the guys manage to approach the level of recognized masterpieces og band. The fast-paced energetic and hit action films Dethrone And Defy, Stormbreaker, and The Star Of Home carry all the best features of the team, combining the soft and positive melody of late creations and the early coldness and detachment of the old school of the early 2000s. I also liked the anthem-like song of the same name “Built to Last” after some time, although at first it was somewhat frightening in her a combination like a trush presentation with extreme fatality of the melody.

In general, however, «Built To Last — album is excellent. Unfortunately, it, like many albums of the current century after the first listening, leaves a vague impression, eventually revealing itself and being a uniquely high-quality and sensible work, at least rustic and lightweight in some places, and in some places not quite aggressive and assertive, but consisting of 90 percent all-metal hits, which brings it close to the title of a masterpiece, which means musicians are on the right track! HammerFall released a strong and thrilling record, that could please both its fans and possibly other metalheads.