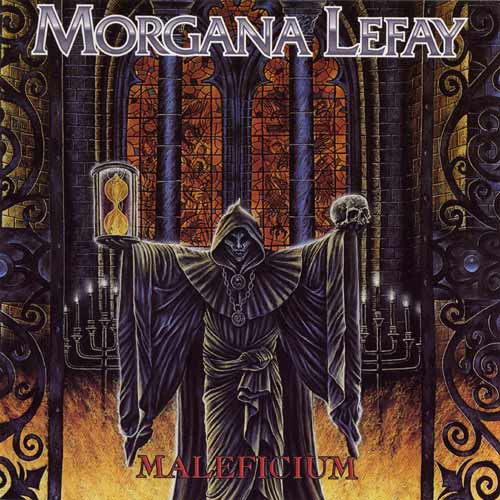 This is Morgana’s most dramatic album. If you just listen to it without thinking about the lyrics, you can hear the melodically very gloomy and aggressive heavy metal, but if you still try to understand what Charles Ritkonen sings about, then you can easily lose your mood for at least half a day. Charles sings just fantastically emotional and sincere. One gets the impression that he experienced the torture of the Inquisitors on his own skin and that the end was really close to him. The depth of emotions, colors and shades in his voice in the form of sadness, anger and madness is presented to him unusually broadly and richly. Only a few in rock and metal can sing in such a “semantic” and “lively” voice, and Ritkonen is just one of such singers. He perfectly got used to the role of his character, with all possible veracity, showing what it means to be in the hands of the executioners without hope of salvation. But “Maleficium” is not limited only to such “extreme” emotions and there is also for example foggy mysticism (Witches Garden) and almost ceremonial majesty (Maleficium) on it. Morgana competently uses powerful group choirs and unobtrusive symphonic keyboard parts on the album, which gives additional atmosphere and epic to the material.

The songs are melodic here simply awesome. Compositions catch, remember and do not leave indifferent for a split second. I would call such great songs as “The Source of Pain”, “Victim of the Inquisition”, “Master of the Masquerade”, “Witches Garden”, “Madness” and “Creatures Of The Hierarchy” the outstanding hits of heavy metal, and all the rest the numbers are simply the strongest songs that perfectly complement this unique album.

“Maleficium” is impressive in its beauty, power and pleasantness of sound, and perfectly proportioning the required number of style elements, such as trash, doom and prog metal, as before, focusing on heavy metal. In general, the album is pretty damn well recorded and sound is at that time the best record of the group, both in other matters and in terms of presentation. “Maleficium”, although it doesn’t “pump” the listener at supersonic speed, but the music on it is quite energetic and “lively” despite all its moderate tempo and leisureliness. The flow of the Swedes has improved by an order of magnitude, the songs sound very premium — think gloomy, pro-sophisticated and trashy drive. Listening to “Maleficium” I never cease to enjoy the material in the best traditions of the depressed technology of Nevermore, the creepy horror stories of King Diamond, the atmosphere of the damp Candlemass dungeons and occult mysticism Therion! With all this, Morgana also has its own original and unlike any other melody and charismatic vocalist. Imagine a mix of releases like the debut of Nevermore, King Diamond «The Eyе», the early Candlemass and Therion «Theli» — and you will roughly understand what “hell on earth» called «Maleficium» is.

In general, the Swedes were very, very impressed with their “Maleficium”. This is the first album from the group with melodies that are memorized the first time, really catchy, and also have a strong atmosphere that touches the very soul of the listener, finally, this album is ideally implemented in terms of recording and performance technique. The best work of the group and the peak of her work.