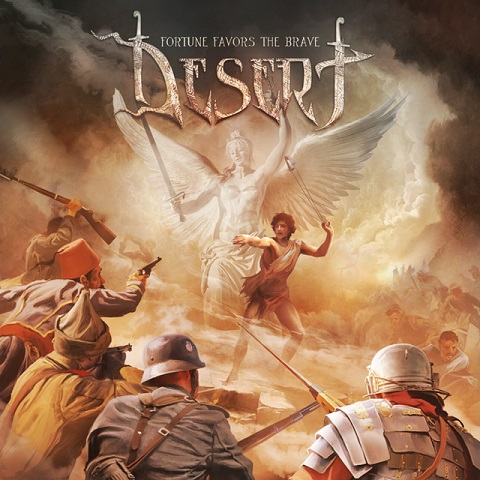 For a long time, the Israeli group Desert fueled interest in their new album, promising weighting and other surprises. To be honest, I didn’t really believe in the weight of the material, but I was pleasantly surprised to hear a heavier sound, and in some places the real trashy riffs and galloping rhythms in style of the late Kreator, and wandering bass like Overkill. This all became a charming addition to the overall picture on behalf of the instrumental composition.

But besides this, I also heard much deeper changes that befell the work of the group, especially recalling what it played before. And I can say that the guys, in principle, moved to a higher level — after all, previous works smacked of underground, especially in terms of dampness and weakness of sound and modesty of presentation. Now, in the pitch, one feels not any confidence or firmness, reinforced again by a slightly damp, but powerful and fattest sound with a kind of “wow” effect of a lively and natural sound. The group somehow abruptly jumped from a synthetic sound to a more natural and “lively” sound, as a result of which it sounded especially juicy, bright, soulful and punchy. But here the material is such that it beats a real fountain of stormy emotions in the form of drive and roll, but also melodic guitar parts, energetic drums, and strong and beautiful singing. More than ever, the group is now closer to the German heavy-power-speed-thrash and the American heavy-power, that it mixes quite harmoniously and competently, making the output a varied, sophisticated and fresh cocktail.

But the most important thing is that band still remains herself in terms of the originality of the melody. Yes, here it resembles the Blind Guardian, and there Iced Earth, or Dragonforce with Kreator, but everywhere you understand that it is Desert. And this is very important, because there are a lot of groups that are similar to someone, and there are very few groups with their originality. Desert, on the other hand, knows how to please both a proven and reliable recipe, but at the same time, do not forget to add its signature cookery melody to each dish-song.

It seems to me that this is not the last round in the development and progression of Desert, especially if you recall with what pro-Gothic material the guys started. Whether they are moving in the right direction for themselves is another question, fans should definitely like this metamorphosis, because the music is fresh and «newest» again. The gang has released a good and sensible compact for lovers of modern and heavy power, whether it has reached the right balance between demonstrating its face and the directions for implementing such a demonstration this time — time and other albums will still be shown. But what is especially impressive and its on every them album — is the presence of exceptionally strong material that I want to listen to and which literally eats into my memory once and for all!